By its allusion to the pre-romantic current known as Sturm und Drang, an 18th century youth-led movement whose ideals were freedom, passion and the emancipation of the individual, Sturm und Klang (“Storm and Sound”), claims energy, spirit and enthusiasm as its major assets. It is in this spirit that the musicians of the orchestra, founded in 2000 by Thomas Van Haeperen, share a driving commitment to projects that demand their dynamism, sensitivity and creativity.

Sturm und Klang's programming focuses essentially on repertoires of the 20th and 21st centuries, with original and demanding projects, in a spirit of discovery, dialogue and conquest of new ways of listening. It also actively supports Belgian musical creation, in particular the young generation (d'Hoop, Slinckx, Tsilogiannis, Grisi, Orlando, etc.) by organising workshops for composers and through regular commissions.

Concert recordings are broadcast on Musiq'3 and Klara radio stations.

Sturm und Klang is mainly supported by the commission for contemporary music of the Wallonia-Brussels Federation. The ensemble works regularly in collaboration with the Composer’s Forum and the ECSA (European Composer and Songwriter Alliance). It has been part of the European network New:Aud, which aims for a wider dissemination of contemporary repertoire.

Since 2018, the ensemble has also benefited from a 5-year contract-programme grant from the Wallonia-Brussels Federation. 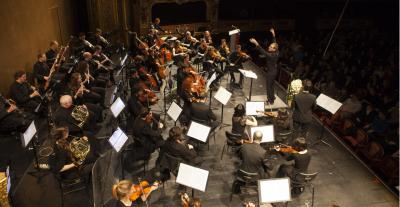